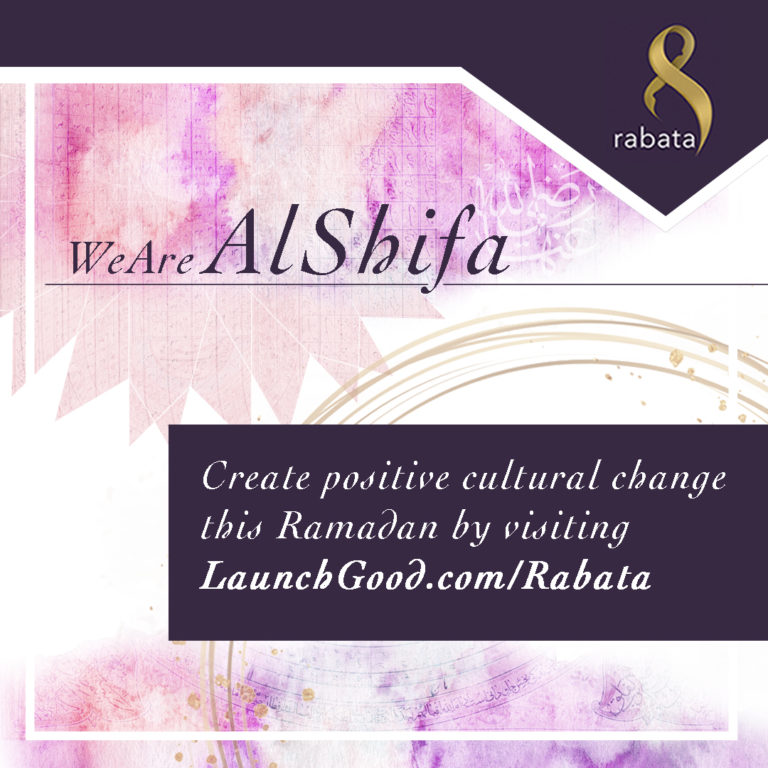 This Ramadan, Rabata is commemorating the life and legacy of the Prophet’s companion AlShifa (ra) by honoring men and women whose lives emulate hers. Below you will find a number of categories that reflect different aspects of AlShifa’s character and pursuits (ra).

We will recognize one nominee in the following categories for his or her contributions to their community that demonstrate what it means to live like AlShifa (ra) today.

Nominees can be Muslim men or women, age 17 and above. You may submit as many nominations as you like, but you will have to complete a separate form each time. The categories are:

Allocated name: Given the name AlShifa’ due to her fame in curing the sick using ruqya for a dermatological disease known as al namla (today termed as seborrheic dermatitis or seborrheic eczema).

She also has a daughter, who married the known leader Sharhabeel bin Hasna

1. Educator – An inspirational teacher who is instilling the love of learning in people around them

AlShifa’ was from the few women who were literate. She knew how to read and write pre-Islam. She was known for her keen intellect and enlightened mind. She would visit Muslim homes and teach the female companions and so became the first female teacher in Islam.

AlShifa’ spent her life in the circles of knowledge. She narrated 12 Hadiths. Women and men would visit her to learn. Amongst those who narrated hadith from her and learned from her were Abu Salama son of Abdul Rahman ibn Awf, one of the greatest scholars of Medina among the Tabi’in, as well as her son Sulaiman, her grandson Abu Bakr ibn Sulaiman, and her servant Abu Ishaq.

It is said that at one time she saw a small group of young men walking listlessly and speaking very slowly. She asked those around her, “Who are they?” They answered, “Gnostics.” Surprised, AlShifa’ replied, “I swear by Allah, when ‘Umar spoke, he was heard; when he walked, he walked fast; when he hit, it hurt; truly, he is the ascetic.”

2. Medical Professional – Someone in the medical field who is using their skills to serve humanity for the sake of Allah

AlShifa’s readings led her to medicine and ruqya, or healing supplications, and similar healing customs that were popular during her time. She was known to practice ruqya pre-Islam. When she embraced Islam, she asked the Prophet (s) if she could continue with her work and the Prophet (s) agreed. She was famous for her treatment of a skin condition called al namla: the appearance of pustules or blisters on the side of the body or elsewhere, which may tingle or sting like the bite of an ant, today termed as seborrheic dermatitis or seborrheic eczema. The companions would come to her house for treatment.

Her specialty was curing the sick and she would come out to battles with the Prophet (s), treating the wounded.

She continued her teachings and healing through the Khilafa of Sayidona Abu Bakr and ‘Umar.

3. Healer – An individual who tends to the wellbeing of others’ spiritual or emotional health on a personal or community-wide level

AlShifa’ was known, from before she became Muslim, to be a healer. She was famous for her treatment of a skin condition called al namla, what is known today as seborrheic dermatitis or seborrheic eczema.

After she became Muslim, AlShifa’ was not sure of the permissibility of doing ruqya using these words which did not come from the Quran or Hadith, and which she had probably learned from her elders. She refrained from using this treatment until she asked God’s Messenger and told him what she repeated seven times. God’s Messenger approved of these words and allowed her to use them. In fact, one time the Messenger of God visited his wife Hafsa and found AlShifa’ sitting with her. He said to her, “Why don’t you teach Hafsa the ruqya for al namla as you taught her how to write?”

Her treatment involved a combination of medicinal ingredients and a healing supplication (ruqya). It went as follows: She would recite: “In the Name of God may it lose its way until it returns to the mouths it came from, and harm no one. Oh God remove the harm oh Lord of the People!” This would be recited seven times over a turmeric root. She would then crush this root with a stone and mix it with a sharp wine vinegar, and apply it over the pustules.

She continued to work with this and also taught other women.

4. Leader – One who demonstrates leadership in any capacity

AlShifa’ was known for her keen intellect and enlightened mind. She was multi-talented and earned a high position with the Prophet (s). AlShifa’ would visit the Prophet (s) frequently to ask and discuss issues and the Messenger (s) used to admire her brilliant mind and her vast knowledge. She was also greatly respected by the wives of the Prophet (s).

It is well established that when ‘Umar ibn al-Khattab became Caliph, he would seek her advice and value her judgement, and he would honor her and give her gifts. It has also been narrated that ‘Umar appointed her as an overseer of the market of Medina, to ensure that trade was orderly, legal and just.

This narration – mentioned in the major reference works dedicated to the biographies of the Prophet’s Companions – is not reliable, however, and whether or not this took place cannot be established with certainty. A story from Imam Malik’s Muwatta lends support to this narration. Malik narrated that ‘Umar one day noticed that AlShifa’s son Sulaiman was absent from the Fajr prayer. ‘Umar noticing Sulaiman’s absence is undoubtedly because of how much he valued his mother. ‘Umar went to the market and asked AlShifa’ why her son was not there for the prayer, and she said, “he stayed up the night in prayer and fell asleep so that he missed the Fajr in congregation.” ‘Umar replied, “To pray the Fajr in congregation is more beloved to me than praying all night.” This narration lends support to the narration that AlShifa’ was tasked with being in the market, because that is where ‘Umar found her.

(They say that the hadith that ‘Umar gave her the management of the market, the sanad of the Hadith is weak and many Muhadethoon denied this. Ibn Saad also said that her children denied it and Ibn Arabi said: It is invalid, from the innovation plots).

Several encounters took place between Sayidona ‘Umar and AlShifa’, which demonstrated her boldness and strong personality and her leadership. Sayidona ‘Umar sent for AlShifa’ to come to him. She says: “I visited him and found ‘Atiqa bint Usaid ibn Abi al ‘Ais waiting at his door. We entered and conversed for about an hour. He then called for a piece of clothing, and gave it to her. He then called for another piece of clothing that was of lesser quality and gave it to me.

I said to him, “O ‘Umar! I accepted Islam before her and I am your paternal cousin and not her. You sent for me, while she came to you by herself.”

‘Umar answered, “I had prepared the [better quality cloth] for you, but when you both came, I remembered that she was closer to the Messenger (s).”

5. Philanthropist – Someone who cares for others by donating to causes that enrich people’s lives

She was known to be a woman who managed the community’s money well and was even appointed as a market inspector by the caliph.

6. Muhajira – Someone who emigrated for the sake of Allah

AlShifa’ became a Muslim before Hijra to Medina, and so was known to be from the early Muhajiras. She – along with her husband – were amongst those who migrated to Abyssinia.

In Medina, the Prophet (s) honored her, and gave her a house, where she lived with her son. The Prophet (s) used to visit her and have his afternoon nap at her house. She had allocated for him (s) a space for this.

7. Parent – A person who nurtures those around them

She also has a daughter, who married the known leader Sharhabeel bin Hasna

8. Literacy Advocate – An individual who promotes the love of reading in any fashion

AlShifa’ was one of those few Arabs in Mecca who knew how to write in Arabic, and would later teach writing to many Muslim women including the Prophet’s wife Hafsa. She loved to read and write and dedicated her life to this life’s work. She was known as the first teacher in Islam.